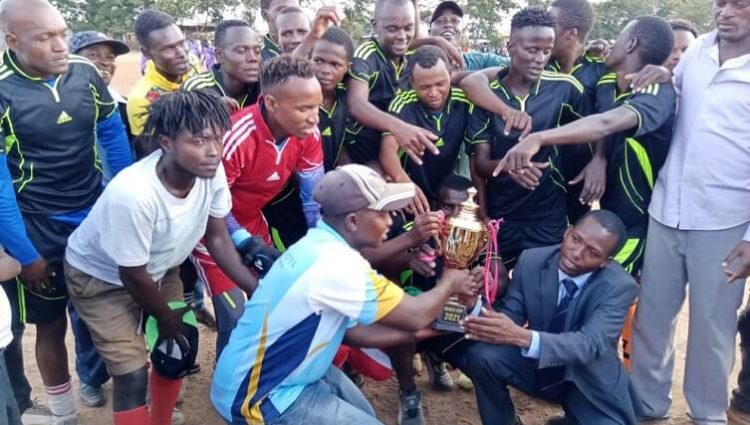 Dreams are unrefined hopes, cost-free aspirations we might accomplish some day. Converting a dream or objective to a goal is a decision to take tangible steps to pursue it. What inspires your dream in life is what you have gone through, what you want to achieve or change in your life all the same.  For people who grew up in a rural setting, many are the times the dream was to someday go to the ‘Big City’, Nairobi. It was expected that going there had an assurance ticket of success, so as to help people back home. More often than not, making it in Nairobi, let alone anywhere in the world, takes time, but it was a dream every village child desired to achieve.

Born in 1981, in Machakos, Kwa Muthike Village (a famous village named after his grandmother), John Ndolo was raised by an ever present but financially challenged mother. As a result of facing a number of challenges growing up, he too had the dream of one day going to Nairobi, and helping his people back at home. He told his profound story, bit by bit, painting a clear picture of how far he has come.

“Going through primary school with no shoes, remaining home during school trips and hardly having a meal on school days – I had a challenging childhood. I had been picking flowers at Enkasiti to earn and pay part of my fee. At the end of it all, I attained a B+ in my high school education. Financial challenges, however, did not allow me to advance beyond this level and I resulted to working as a sand scooper and at other times, tilling people’s land.

Later on, my employer’s son enlightened me about a recruitment drive at the National Youth Service (NYS). An opportunity to go to the city and learn, I would not have it pass by me untapped. My mother sold a goat to finance my going to NYS and once there, I did not disappoint her. I emerged the best out of 5,784 recruits and got an opportunity to meet the former president Daniel Toroitich arap Moi; this earned me the title Sergeant Ndolo. As a result of the keeping in touch with my networks, in 2008, I was contacted by NYS, though I had long left the training institution; an opening for a driver at Strathmore University was brought to my attention. I was later acquired into my second home, Strathmore, in June that year. My journey with Community Outreach Program (COP), a club at the University, begun soon after. As I ferried Stratizens to the different schools in Kitui during Mentoring camps, I would get time to have a sit down with the high school students and give them sessions on life skills and the importance of education. Sometimes the students are derailed from the right track by quick fixes and small time pleasures. These experiences planted the seed that would help me assist those closes to me in my home village.

After 12 years in Strathmore, on 26th August 2020, I was able to kick start the Ndolo Camp. Archbishop Muheria, who would spend time with us during the Community Outreach Program (COP) camps, was a huge inspiration.

Dreams don’t work, unless you do

Back home, the youth have a number of obstacles to face daily, predominantly drug abuse. I single handedly revived a dying local football club with 6 teams of the 12 that had existent previously. My aim was having the young men (ages 10 – 35) preoccupied three days a week so as to instigate the vision of a better future in the long run. Reviving the team spirit through football has so far given the community a glimmer of hope in the lives of the boy-child. It keeps them away from mischief and greater dangers occasioned by drug abuse. As a result, they have taken their studies seriously, become more disciplined and rejoiced in the small wins on the pitch over a soft drink and bread. During the tournaments, a trophy goes to the winning team and we call it a day.

The Covid-19 pandemic presented an opportunity to spread some acts of kindness, getting me thinking of ways to reach the youth and provide food supplies for the elderly. A few weeks ago, I organized a food and clothes drive in the village. This supported the elderly who have been hard hit by the economic effects of the pandemic. I cannot say I have walked alone in this journey. Strathmore filled my cup until it ran over, which is the reason I am very willing to share what I have in my pocket. The young men have received counsel from the Deputy County Commander – Narok; the older and wiser men have taken up guiding the young men in the community. I have immense gratitude for all who have contributed to this cause, including uniform donations, and the team and I welcome anyone else who may want to stretch a helping hand.

As my parting short, though I love working with youth, in my opinion, social media presents itself as a great concern. The rate of comparison and ‘want-to-be-like syndrome’ is worrying. Live within your means, however humble. And in the words of the desiderata, if you compare yourself with others, you may become vain or bitter, for always there will be greater and lesser persons than you.”