Home News COP Juvenalised – Will you be a Carrot, Egg or Teabag? 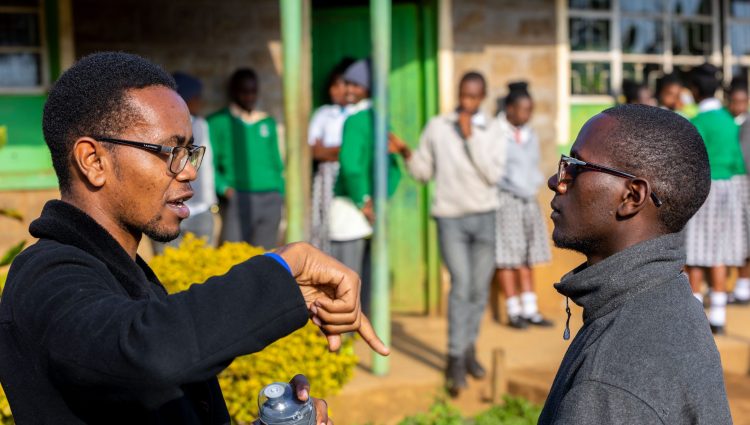 A wave of nostalgia swept me away as I peered out the window at the lush grass by the school hall. It bore with it memories of my high school admission, visiting, award ceremony, and clearing day. The first week of my KCSE, which was similar to this week for the dazzling Juvenalis students, became the dominant memory.

The air was crisp and fresh and the atmosphere was filled with melodious and energetic singing. The ground was generous enough to hold the mighty moves of the dancers in that hall. Oh! It was certainly different. We felt the warmth as we approached the gate of Juvenalis Gitau Secondary School and yes! We were definitely going to join them in taking captive the environment with our enthusiasm and energy following an invite we had received to join them on their Prayer Day. But before we made it to the hall, we were ushered into the staffroom for some breakfast. Delightful and tasty. Amidst the murmurs and laughter of my fellow volunteers, the peeling of bananas, and deshelling of eggs, our hearts were fully expectant of what the day had to offer us.

Energy up, belly full, we made our way to the mabati hall, around 100 steps from the staffroom. The hall is a semi-permanent structure where to the least of our knowledge, words of permanence would be shared with the students and guests in the course of the ceremony. The hall was half full when we got in, but within an hour, parents and siblings one after the other filled every seat.

Presentations from the students took place after the praise and worship session and the songs and words of encouragement from them were beautifully presented. Sometime back this year, in June to be precise, that was not the case. So downcast and shy were the students that if you saw them, you would think that is how they were created to be. In that mentoring activity organised under the Community Outreach Programme (COP), the COP volunteers put in effort towards consistent encouragement and affirmation for the students. All these were in a bid to gear them towards confidence and a positive self-image. And look, six months down the line, they were signing up for presentations and individually presenting them to an audience brimming with their classmates, teachers, and parents! Such progress! Such beauty! Such a sense of purpose was fulfilled. I was very pleased.

“When you are going through this process called life, have a heart for God, a heart for service, and patience. In order to put your gift to use, identify it, analyse it, and evaluate your life,” the preacher spoke to us with such profundity and compassion as he delivered his sermon.

“I am a student of life, and you, my sisters and brothers are too. You are in this place at this very moment. And sure enough, for the seasons that are yet to be, there is a place in the world for each and every one of you 39 pupils, so don’t belittle yourselves. Welcome to the world, dear ones!” said the ever-inspiring Wahu.

“It is possible because I am here. God graced me in my KCSE and I improved by two grades. I am set to sit my final exams at Strathmore University in a week’s time and thus far, I have not lost sight. Keep the vision clear regardless of your outcomes. I urge you, parents, to extend grace to your children, no matter the results. It is never the end,” Mogeni encouraged the parents and students. He finished off by chanting “Ninaweza” with the students. A powerful affirmation indeed.

“You see, life is like hot water, and you have the choice to be a carrot, an egg or a teabag in this life. Who do you choose to be? Hot water softens a carrot, much as life’s circumstances can completely break or soften certain individuals. On the other hand, when an egg is placed in boiling water, the outside becomes rigid. Will you live a life of defiance and arrogance when the going gets tough? Or are you going to be like a teabag that, when dipped in hot water, quickly turns clear water to a dark brown shade? Will you have a long-lasting impact on those around you and your environment?” Michael Babu, the Project Manager at the Community Service Centre, asked the students, although in reality, the questions also left both parents and the COP volunteers in deep thought.

Saying I was there the entire time would undoubtedly be a lie. Most if not all words shared in the hall had me drift back to my life and look at it through a new and well-cleaned lens. One that brought more clarity as the words and questions asked by the speakers guided me. Oh, it was filling and the great vibes were everywhere in the environment. The parents nodded in harmony with the speakers as they shared and narrated their life journeys. Their appreciation for the speakers’ truths, which were graciously shared with their children, was very tangible.

My fellow volunteers and I were invited by the prayer leader to join the students and parents in praying for their hall and classrooms, where they would be doing their examinations. We walked to their classes (two in number) and I went to Room 2. There, I stood by one student and her parent and my oh my! It was beyond an honour. I stood there throwing glances at the other desks and the students. And again, a wave of nostalgia flooded my mind. Additionally, I imagined myself as a parent to my own child, maybe in ten or so years, and woof! Lots of emotions and wondering sprouted within me. The environment was definitely packed for me. We were led in prayer and after that, went back to the hall for the final session.

By around 1500 hrs, we were done and on the bus, we went. We had lunch as we heartily reminisced about the day’s events and many other hilarious topics discussed. Laughter chained the bus for half an hour after which we left. My journey to the school and from it were very very different. In the morning, a beautiful, enriching, and deep conversation reigned between me and Tess all the way. An hour and a half has never felt so short. The journey back was crowned by sleep from all the way. Even I surprised myself by how much I had slept by the time I got up to my friends alighting to go unwind over a football game. What a day! What a way to be Juvenalised!