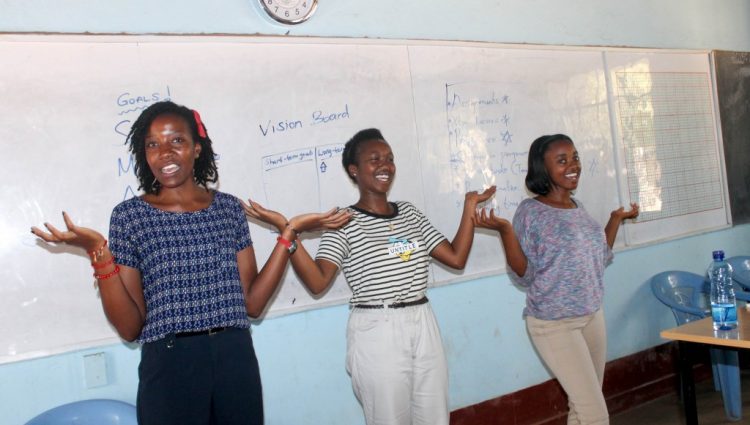 “What does it mean to fight the battle that is in your mind?”

A question asked by a form two girl. Now, I don’t know about you, but the me who had traversed 3 counties, passed a number of trees that were blessed with a hefty amount of dust, along a narrow murram road in order to get to that classroom, was humbled.

I won’t dwell on the answer I gave at the time, let’s just say, it required the summoning of all the wisdom I had gained in the 19 years of my life; to say the least.

However, after putting some thought into it, I realized that it all boils down to the little decisions we make from time to time. Choosing to set aside some time to be part of such an initiative of being a channel of encouragement to small sisters, even when there are 100 reasons tying you down. Choosing to focus on the one thing that make you happy, say, jamming to your ‘monyGee on the beat’ school song (the St. Monica Girls’ school song is such a vibe) and the ripple effect of laughter and excitement it causes to your audience, even when there are 100 reasons convincing you that this world is big and scary.

Speaking of happiness, after day 1 of mentoring, we paid a visit to Saint Michael’s school for the deaf. The aura of love could literally be felt from the gate. There’s nothing like beaming children running towards you to greet you. Despite my incompetence in sign language (something I would love to work on) there was an immense feeling of contentment when we’d gaze at each other and just smile because of the mutual understanding of what it meant to BE in each other’s presence.

To me, winning the said ‘battle’ is not a one sword, one time job, it’s an endless series of choosing growth, of finding some time to do something, and not just some ‘thing’ but SOMETHING tangible. All things considered, the Kitui experience was lovely! The sharing of personal experiences with the girls, getting to know other people’s perspectives on different issues, especially during the evening conversations, the change in environment and majestic sceneries that came with it, making new friends made the experience totally worth it!

I highly recommend it.