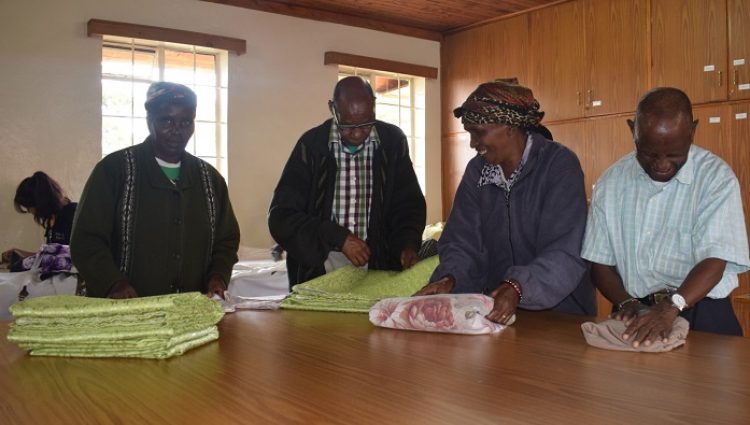 In all honesty, I wasn’t going to be available for this weekend’s Community Outreach Programme visit to Nyumba ya Wazee for reasons I thought were beyond my control. I wanted to, but I guess I didn’t have the motivation. That was until Thursday evening, when I told my father about the plan. Little did I know that by revealing that information, I would be surprised in more ways than one.

My father volunteered at the home from 1991 to mid-1993. Two and a half years of community service, cleaning, talking, listening to, and cooking for the wazees. He looked after the late Cardinal Maurice Otunga as well as many Mau Mau fighters. It was mind-boggling to realize that 31 years later, I’d be doing the same exact thing my father did when he was about five years older than I am now. It provided us with a stronger sense of connection that made me happy.

Moving on to the day’s events, it was an emotional rollercoaster from the start. My father had briefed me that it is a home for poor and abandoned elderly parents, and hearing that broke my heart. Reality only sunk once I was at the Home. I was fighting back tears throughout the visit. I promised myself I wasn’t going to cry, at least not in public. It passed, but it was heart-breaking.

The day went well; we assisted with cleaning, meal preparation, ironing and folding laundry, and fluffing pillows, among other things. We went on a tour of the home and finished the day by interacting with the wazees.

I had the pleasure of speaking with one of the wazees. At 85 years old, he is an interesting man. His perspective on life struck me the most. When asked if he was happy here, he quickly replied, “No.” He had no reason to exist. He was unemployed. He had no wife or children. He had nothing to do to keep himself occupied. He couldn’t be happy because he had no one to be happy for, and he couldn’t be sad for the same reasons. From his perspective, this was the end.

He has led a fascinating life. He was a Mau Mau fighters, and when the war ended, he discovered he had nowhere to go. He had no idea where his wife was, so he moved to Ruiru and worked as a night guard for 20 years. He had a tragic stroke that left him unable to work. He had a caretaker for a while, but because it was difficult, he was brought to the Home where he has spent the rest of his life.

Listening to his life story provided me with a significant shift in perspective. Anything can happen in life. We don’t get to pick our circumstances. We play the game with the cards we are dealt, regardless of how good or bad the hand is.

I talked to my father about how the day went, and we’ve decided to go back as a family. It appears to have become a tradition now.

COP Activity to Brydges Centre- A reminder of Personal Growth

COP Activity to Brydges Centre- A reminder of Personal Growth