Prof. Aranguren: At the service of the neediest

Home News COP Prof. Aranguren: At the service of the neediest 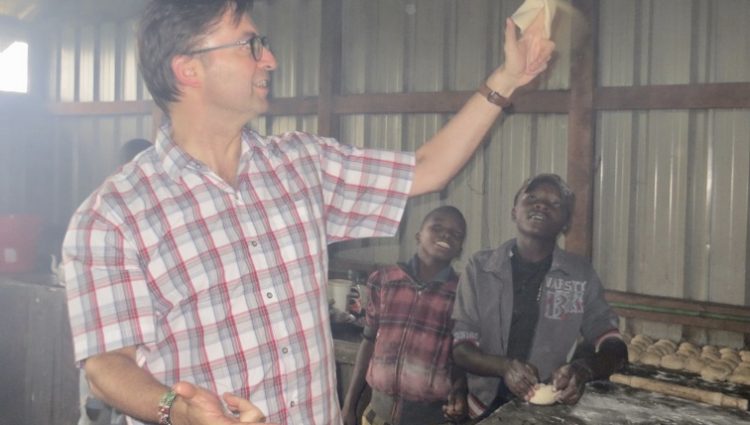 Prof. Javier Aranguren spent his sabbatical leave (2015 – 2016) in the School of Humanities and Social Sciences (SHSS), and has been a visiting professor in the school from time to time. His stay in Kenya changed his life for the better and with his experiences leading him to found Karibu Sana, a project in support of Kenyan children. He has also been working with the Community Service Centre for a number of years.

This year, he returned via zoom, as a guest during the Founder’s Week staff webinar, to narrate his personal experience of facing two challenging illnesses which he had to fight in order to keep living: In 2019, he was diagnosed with cancer and in 2020, he caught the Covid-19 virus.

Below is an interview in which he talks about Karibu Sana which he has been working on from his base in Madrid, Spain. To the children he has met through this project, he attributes his fighting spirit and will to live even at his lowest moments.

Can you tell us a bit about yourself and the project Karibu Sana?

I arrived in Nairobi for the first time in August 2015. I had been hired by Strathmore University to teach Philosophy for a year. In the end, I stayed in Kenya for 18 months, but I left a changed man. Let me tell you what happened.

In October 2015 I met a child who was begging in the street, close to the University. His name is Victor. I wanted to understand why he was begging instead of going to school. After talking to him and to his parents, whom I visited, I found out that the father was earning around KShs. 6,000 per month, and with that he had to choose between feeding his children or sending them to school. Victor was thirteen years old then. Without an education, he was doomed to remain in poverty forever. Also, his childhood was going to be hard. I decided to take care of his education. The amount to pay in a day school was just KShs. 2,000 per month; something not too difficult to do.

He was the first of many others. That was the beginning of the Karibu Sana Project. It began to take shape in my mind as I reflected on the ideas suggested by Pope Francis for what he called the Year of Mercy (2016). His ideas gave me the motivation to continue with this “crazy” project. One after another new boys and girls were arriving. Today the project has 427 scholars. What else are you engaged in, as you continue to champion change and hope?

In January 2016, while living in Nairobi, I met the Sisters of Mary Immaculate of Eldoret. They have a home very near Strathmore called Kwetu Home of Peace. At Kwetu, they rescue, rehabilitate and reintegrate street boys from the city of Nairobi.

Kwetu started in 1996. They have about 100 children in two different venues at any given time: the drop off centre (Madaraka) and the main centre (Ruai). The boys stay in the drop-off centre for the first three months and are later taken to the main centre for two years, as they are encouraged to resume their schooling. After this time, if possible, they go back to their families.

Karibu Sana Project has been supporting Kwetu by helping them to start a farm and to improve on a dispensary. Our goal was to help the Sisters make Kwetu financially self-sufficient. We also have paid medical expenses for one of the children who got very sick.

In 2018, the Sister in charge, Sister Caroline, commented to me that they had realized that a large percentage of the children were back in the streets two months after being taken to their families: poverty, violence at home, their parents’ struggles with addictions, were the usual reasons for their return to the streets. I told her that I would try to get funds to take all the children that finished their time in Kwetu to boarding schools. We have taken care of 65 of them so far. We are immensely happy with this initiative because all of them (100%) are still going to school, even after the Covid crisis that closed the schools in Kenya for almost 9 months.

Further, in February 2021 the same Sisters opened Dorothea Rescue Centre. It’s aim follow that of Kwetu Home of Peace but it caters for girls. Karibu Sana Project has given the money for them to get all the furniture, sheets, towels, clothes, etc. for 40 girls. We have also got the money needed to install solar panels for them to have electricity. Where do you get the money to support all these projects?

Karibu Sana Project gets the money needed from donations made by friends, relatives and well wishers. Most of them are normal people able to give a small amount monthly (most of them something between KShs 1000 and 4000 per month). But we have managed to increase the number of donors: they were 85 in 2019 and today we have almost 250.

As the project grew, I realized that I could not manage all the paperwork and administration given that I already have a full-time job, so I approached the Fundación Promoción Social, which adopted Karibu Sana as one of their projects.

How do you see the future? What are the main challenges that you see ahead?

Our challenges for the next few years, and where we need support from well-wishers, are:

If somebody wants to give a donation for one of your projects, what do they need to do and how much of it reaches the beneficiaries?

As I have said, Karibu Sana is now a project of Fundación Promoción Social in Spain. Our local partner is Strathmore University in Nairobi. 93% of the donations are sent to the proposed destination. 7% of the donations are spent on administration. Personally, I work as a lecturer of Philosophy at a university in Madrid. I get no income whatsoever from the Karibu Sana Project.

Given all the projects that we have already undertaken, we will not be starting any new ones for the next few years. What we need are well-wishers who can help us pay some of the bills. So anybody in Kenya who would like to help in any way can contact me through email: jarangurenechevarria69@gmail.com.

I would also like to encourage anybody reading this to see what each one can do to help those most in need. You do not necessarily need to support Karibu Sana. You can start your own project and help so that there are fewer “Victors” in Kenya and the rest of the world. Any plans to come back to Kenya soon?

I try to visit Kenya at least once a year, but COVID-19 has made this a bit difficult. But once the pandemic is out of the way, I hope to keep visiting Strathmore and the different projects and individuals we support. I really enjoy visiting them.

Thank you, Javier, for what you are doing for Kenyan children!

Ruby Mutheke and Diana Nelima are all smiles, visits to Our Lady of Protection, Museve Shrine