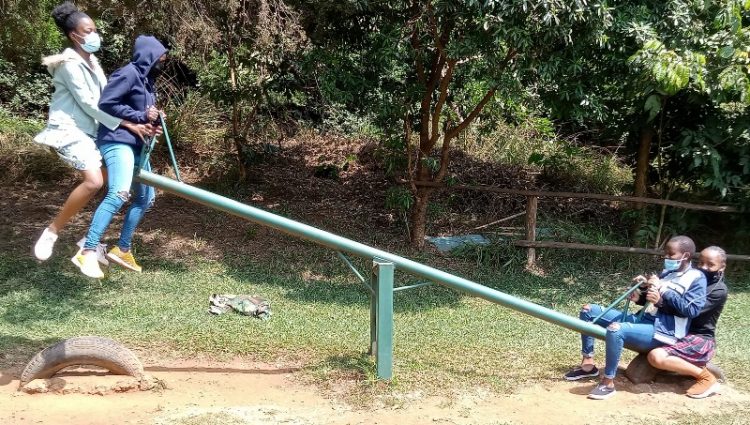 |By Joan Mathenge and Teresia Maina|

Karura Forest is an urban upland forest on the outskirts of Nairobi managed by the Kenya Forest Service in conjunction with the Friends of Karura Forest Community Association (FKF). Its geographical location and natural resource make it one of the largest gazetted forests in Africa, covering an area of about 1000 hectares. The forest is popular, since it is where the late Professor Wangari Maathai, leader of the Green Belt Movement and Nobel Peace Prize Laureate, carried out a lot of campaigns in  a bid to save the forest from developers who tried to grab huge portions of it.

The Community Service Centre organized a trip to the forest for the Macheo students on Thursday, 22nd July, 2021. The day was warm and bright, making the expedition bearable. The students’ excitement was palpable and upon arrival the girls immediately rushed to the swings while the boys engaged in some workouts thanks to some huge tyres lying around. These students had just completed an academic year and were about to start a new one, with a few days of holiday in between. The pandemic brought about many disruptions and the school academic calendar was not spared. Owing to the pandemic, the academic year was compressed forcing the students to cover more content within a shorter period than before. Needless to say, the students were exhausted both physically and mentally, and the excursion presented a much-needed break.

Shortly after our arrival, the students were divided into two groups with several Macheo mentors joining these groups. Each group was led by a ranger over the course of the two and a half hours walk where, amidst the chatter and laughter, the forest’s serenity was felt. Despite it being a weekday, the presence of several families and friends taking walks confirmed the forest’s popularity. The most striking sites for the students were the 15-metre-high waterfalls and the caves considered to be sacred by many. Tradition has it that these same caves were used by the Mau Mau freedom fighters as hideouts during the struggle for independence. After the adventurous and educational nature walk in the serene and salubrious environment adjacent to the city, the team assembled to have lunch before leaving for home. The students expressed satisfaction with the trip and described their experiences as great, educational, fun and adventurous. In conclusion, I find it rather monotonous to comment on the countless selfies and group photos taken during this excursion. Also, who knew seven kilometres would feel so short a distance!