Service to the Mawe Ya Kati Society

Home News COP Service to the Mawe Ya Kati Society 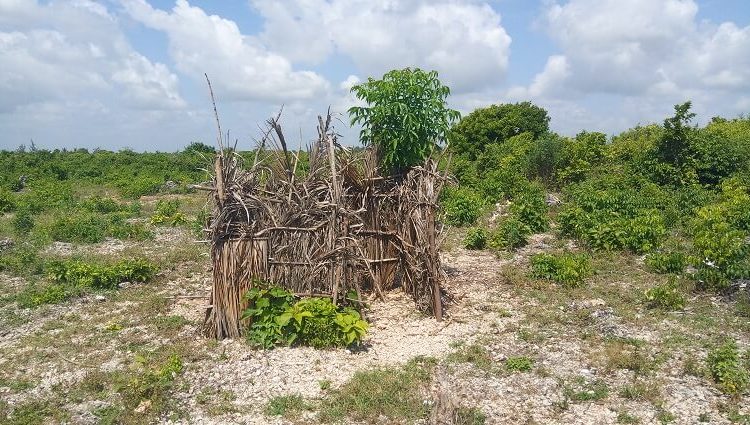 |By Christopher Momanyi and Wambui Gachari|

The heavy rains in December 2019 swept away the makeshift sanitation facilities that had been put together to serve students at Mawe Ya Kati Primary School, a community school situated North East of Watamu. The first cohort of candidates sat for KCSE in November 2019 in the school built by parents who saw the plight their children underwent in a bid to access education at the nearest school, 10 km away.

Six months prior, four students from the School of Humanities and Social Sciences (SHSS) and their lecturer, Christopher Momanyi, had spent time with students at Mawe Ya Kati. On their tour of the school, Mr. Momanyi was surprised by the sorry state of the sanitation facilities that the students were using.

“They looked like the pit latrines common in the countryside and which many Kenyans have used at one point in their lives. But I was wrong. At a closer glance, these were just shelters that did not provide dignity and privacy.”

Not only were the facilities of poor state but the entire school needed an overhaul, an ambition that seemed close to impossible to undertake due to lack of finances.

Mr. Momanyi had this encounter after jokingly telling a colleague at SHSS that he would like to supervise students in Mombasa, if it would only take him an inch closer to snorkeling sessions in the ocean. He was then handed a ticket to the coast to supervise the four students working at the Utawala Project as part of their industry based learning requirements. With the picture of the makeshift structure firmly imprinted on his mind, he came back to Strathmore University charged with the desire to improve the conditions.

Kenya is one of the countries that did not achieve the Millennium Development Goal (MDG) that aimed at increasing access to water and sanitation. According to a joint report by the World Health Organisation (WHO) and the United Nations Children’s Fund (UNICEF), only 51.3% of Kenyans have access to improved sanitation facilities.

To illustrate this, in 2017, Adrian Kamotho Njenga, took the Council of Governors and three public entities, Kenya National Highways Authority, Kenya Rural Roads Authority and Kenya Rural Roads Authority, to court for having made no effort towards providing critical sanitary amenities to the users of public roads. As a result, commuters on public roads especially those on long distance travels, find themselves in unsavory situations, that subject them to immense biological, metabolical and physiological torture.

The court ordered the Transport Cabinet Secretary to constitute and chair the Working Group which would include representatives of all the respondents, to formulate a policy for the provision of toilets and other sanitation facilities. The Working Group was charged with the collective responsibility of ensuring that right to a clean and healthy environment on the roads was realized.

Now back on campus, Mr. Momanyi floated the idea of reconstructing the facilities in his classes. As a result, in July 2019, Lee Oigara, a then second year Bachelor of Commerce (BCOM) student, together with his cousin, joined a group of Spanish students who jetted into the country for a service based work camp at Mawe ya Kati. The Spaniards had raised money to paint the school, repair the windows and level the sports field that was full of protruding coral rocks. However, the washrooms still remained untouched.

Later in the year, in November 2019, armed with Kshs. 500 donated by a student, Mr. Momanyi made the trip with two Strathmore Institute of Mathematical Studies students: Patience Mebo and Selin Chebukwa. Daniel Kihumba from the Administration Services department joined them. Despite his optimistic outlook and supportive team, Mr. Momanyi still had a long way to go in raising the funds needed to pay for the drawing of the washroom block, the workmen and buying of building blocks. Thanks to his persistence, he raised Kshs. 12, 000 within two days: the project became a reality. To add to the already growing kitty, he got in touch with another friend, a Croatian national working in Qatar. A frequent visitor to and a person fond of Kenya, she sent 1000 Qatar riyas, an equivalent of Kshs. 27, 000 then.

Back to the drawing board

Unfortunately, the sand to be used for the foundation was swept away by the heavy rains pounding the country. This mishap threw him back to the drawing board, but the rain did not wash away his resolve to complete the project. He continued raising awareness of the project in his classes.

“My May – Aug 2019 BCOM Evening class chipped in. One of the students, Sarah Kolundu, was instrumental in this. She approached me three times to give me tips on how to raise more money, suggesting that I rally Caleb Kandagor, the lecturer who would be with them in the next semester, to promote my cause. This worked like a charm and by late November 2020, I had Kshs. 22,000 from them,” narrated Mr. Momanyi.

The raised funds were used to purchase blocks and sand to complete the foundation. The immediate task at hand is to pull up the walls, which would make the washroom ready for provisional use.

“I envision each class in the University owning a project and completing it before they graduate. I’d like the success of this project to serve as a model and I plan to approach the Student Council to help popularize this idea and implement it.”

Have you listened to the Winning@LifeSkills Podcast?